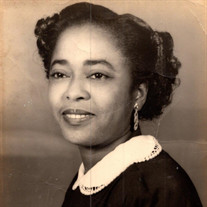 Mrs. Lovie Lee Peterson was born on Oct. 11, 1913 in Jennings, FL, to the late O.D. & Florida Tracy Gipson. She attended public schools of Hamilton County. Her parents, 2 sisters, Edna Aires and Lula Arter; 2 brothers, Homer Gipson and Andrew Campbell preceded her in death. She was converted and baptized at Lily of the Valley Baptist Church. Later Lovie moved to St. Petersburg, FL. She was in her 20s when she married and, leaving her husband behind, accepted a job in Buffalo, NY where she worked for Bells Airlines and various restaurants. Lovie was an avid gardener. In her garden she planted, weeded and pampered. Flowers and plants responded beautifully to her daily care by blooming endlessly for her but no one else. Birds were fearlessly attracted to her presence, landing on top of her outstretched hand for an anticipated snack, but avoided others. Lovie had no children of her own, but thanks to her sister Edna and husband Ernest, there were young ones from 5 generations that she “adopted” and cared for as her own. To those she adopted and almost everyone else, she was “Aunt Love.” But Aunt Love was also known by most as a “busybody.” Yes, she was a busybody in the garden and she was a busybody in the kitchen. In her teens, she learned to cook on a wood stove. The word was out! She loved to cook, cook enough, and cook often for most anyone. Lovie was busy in the sewing room. Many will attest to her self- taught skills with sewing machines, needles and yarn. Nimble fingers put together wedding gowns, quilts, crocheted blankets, etc. Lovie was a member of Faith Memorial M.B. Church where she served faithfully for over 50 years. Known for her soft and gentle nature, she sat quietly but was totally committed with evidence of her love for the Word and support of the Women’s Ministry. Lovie continued to be busy with those she “adopted.” To them she was a teacher, confidant, disciplinarian, comforter, protector, and voice of cheer and encouragement. “I’m Not Tired Yet.” But like well- cared flowers, Lovie responded with a growing smile when her “adoptees” returned to pamper and care for her as she did them. “I Get So Much Joy.” On May 11, 2021, Lovie, the object of God’s affection, answered His call. “Oh to be Kept by Jesus” for 107 ½ years Lovie’s faith had found a resting place. “Like a shepherd He will tend His flock; in His arms He will gather the lambs and carry them in His bosom.” Is. 40:11 Lovie leaves a legacy of beautiful memories to 2 nieces of the 2nd generation: Inez Lavind and Gwen Dixon and to the 3rd generation of great nieces: Angie Edwards, Phyl Aires, Kimberly Pierce (Conell), Cheryl Wilson, Sybil and Julie Monroe, Cara Dixon-Taliaferro (Hardy), Gail Lavind, Arlene and Mimi Ayers; nephews: Craig and Barry Miller (Barbara), Charles (Priscilla), Leon, Leroy, Michael (Vernell), and Ernest Monroe; and a host of other loving relatives and friends, including Mrs. Joyce Wright and Mr. & Mrs. Alonzo Wade. Lord we thank you “For Your Goodness and Your Mercy Towards Us. We Offer Praise”

The family of Lovie Lee Peterson created this Life Tributes page to make it easy to share your memories.

Send flowers to the Peterson family.