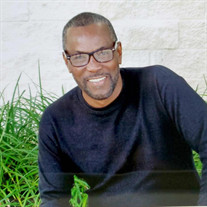 At Time to Live: On Monday, February 8, 2021, Lorenzo Dukes, a loving husband and father, was given his angel wings at the age of 65. Lorenzo, fondly known as, “Lo”, to his wife Valerie, family and friends, was the second oldest of four children born to Joseph and Sarah (Shiver) Dukes, on February 26, 1955. A Time to Learn and Labor: He attended public school in St. Petersburg, FL, served honorably in the U.S. Navy, received an A.S. degree in Computer Technology in 2005 from St. Petersburg College, and completed the Culinary Arts program at Pinellas Technical College. Several years later Lorenzo utilized his education and life experiences to cook, cater events, and establish a computer repair business. Prior to this, he served the community while working at Operation Par as a Behavior Technician. A Time of Leisure: Lo was a lifelong learner and avid reader. He was the family photographer, provided video/CD service and MSNBC political commentary. He also had a natural talent for fixing almost anything. He wasn’t the type to be in the spotlight, but was willing to make sure a task or event was successful. He was definitely someone who you could count on to lend a helping hand, but wouldn’t hesitate to say, “you can have complete autonomy!” A Time to Love: It’s impossible to express how deeply he will be missed, and the vital role he played in the lives of family and friends. He played a significant role in helping to support children, grandchildren, nieces, nephews; even day care clients from his union, as well as any young person he adopted as family. In addition to all of this, Lo was a longtime caregiver for his father Joseph. One thing we’re absolutely sure of, is that many people will miss his infamous buttermilk Pound Cakes, delicious meals, long Bible discussions, words of wisdom, spontaneous sense of humor/laughter, and the many talents and gifts he shared with those he loved and cared about. A Time to Leave: Lorenzo leaves to cherish his precious memories: - His loving and devoted wife, Valerie of nineteen years, and lifelong friend; - Children: Marcel Morrow, Eric Davis (Nicole), Danielle Davis and Erin Kitchen; - Brothers: George Dukes (Darlene), James Dukes, Genard Dukes (Lillie); and - Sisters: Betty Dukes Odne’, Beverly Dukes True and Elaine Dukes Barney. A special recognition to his devoted granddaughter Diara Phillips and eight cherished grandchildren; and his dear Godmother, Mary Loue Watkins. He is preceded in death by his parents, Joseph and Sarah Dukes, and will be missed by a host of relatives and friends.

At Time to Live: On Monday, February 8, 2021, Lorenzo Dukes, a loving husband and father, was given his angel wings at the age of 65. Lorenzo, fondly known as, &#8220;Lo&#8221;, to his wife Valerie, family and friends, was the second oldest... View Obituary & Service Information

The family of Lorenzo Dukes created this Life Tributes page to make it easy to share your memories.

Send flowers to the Dukes family.