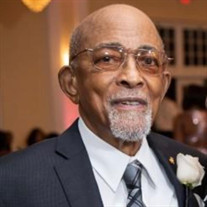 The Life, Loves and Legacy of Livingston A. Albritten, Sr. Livingston A. Albritten, Sr. was born on October 17, 1931 in Thomas County, Georgia, to the late Arthur and Elvira Abrams Albritten. He was the youngest of two siblings born to this union, and he was preceded in death by his sister Gladys Albritten Tift. His family migrated from Thomasville, GA to St. Petersburg, FL when Livingston was a young child. He attended local schools and graduated from Gibbs Sr. High. After high school he was drafted into the US Army, and honorably served the country in Fairbanks, AK. While in the Army he played on the Base basketball team, which earned him a scholarship to Fayetteville State Teachers College in NC. After two years in Fayetteville, he returned to Florida and completed his college degree in Elementary Education at Bethune Cookman College in Daytona Beach. Shortly after graduating from Bethune Cookman, he was introduced by a mutual friend to the love of his life, Irma Richardson. They were married on June 4, 1961, and to this union two sons, Livingston Jr. and Shawn Travis were born. One of Livingston’s legacies was that as an educator, where his fellow teachers called him Al! He taught and mentored for 33 years in Pinellas County schools. He started his career at Wildwood Elementary in St. Pete, then moving to Plumb Elementary in Clearwater before finally moving to Azalea Middle School in St. Pete where he spent the majority of his career teaching Social Studies and Geography. After retiring, it was rare that he could take a local trip to the grocery store, mall or visit a church and not be greeted by “Mr. Albritten! - you were my favorite teacher”! One of Livingston’s loves was that of the Lord! He gave his life to Christ at an early age and was Ordained as a Deacon at First Baptist Institutional Church in June of 1983. He prayerfully served as a Deacon within his Church, faithfully attended men’s Bible Study classes in the area and personally ministered to the homeless and hungry in St. Pete after his retirement. Livingston also loved talking! He truly never met a stranger and would strike up a full conversation with anyone about his family, sports and the Lord! He also rejoiced in making phone calls to family members, friends, neighbors or church members where he always had an upbeat word to share and to pray for their well-being. Praying for others was truly one of his spiritual gifts! Livingston’s greatest love was that of his family! He was very proud of the 59 years he had been married to Irma and their life together! Being a Brother-In-Law and Uncle in the Richardson family was also a joy of his. He loved and nurtured his two sons, Livingston Jr. and Shawn, but he absolutely worshipped his grandson and namesake, Livingston III (Tre) who he affectionately called “The Boss”! His maternal family, the Abrams started a family reunion ritual in Thomasville in the summer of 1980, and they have dutifully hosted them across the country every two years since then (and Livingston and Irma attended all but 2 of them)! He was elated that he had lived to be the oldest Abram’s family member and for their rich legacy of togetherness, faith and success! Livingston’s legacy will be carried on by his survivors; his wife Irma Richardson Albritten, son Livingston Jr. (Phyllis Goss-Albritten), son Shawn Travis (Monica Brady Albritten), grandson Livingston III (Tre), Sister Rita Albritten, Sister-in-Law Althea Richardson Neal, Sister-in-Law Mary Richardson Ferrell (Reverend Ernest Ferrell), nephews Charles Neal Jr, Kevin Neal, Andre Moore, Michael Neal, Julian Moore and Terrance Moore, nieces Angela Neal Smith and Marilyn Fuller Tift and great niece Keyonta Shay Tift.

The family of Livingston A. Albritten Sr. created this Life Tributes page to make it easy to share your memories.

The Life, Loves and Legacy of Livingston A. Albritten, Sr.

Send flowers to the Albritten family.