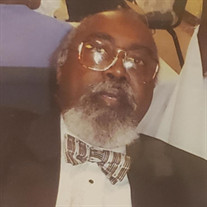 Lenton Hobbs Jr. was born on September 5, 1947 in Cross City, Florida to the late Lenton Hobbs Sr. and Amanda Jackson Hobbs. At a young age, after the death of his mother, Lenton Jr. moved to Ft. Myers, Florida where his aunt, Arizona Clark, raised him. When he was nine, he moved to Pinellas County with his father, stepmother Josephine, and his siblings. Lenton was a versatile artist. In high school, he was in demand for both band and chorus. He split his rehearsal time playing trumpet and singing in the school choir. During life, one of the most distinguishing things about Lenton was his singing voice. His deep, smooth bass caused people to stop whatever they were doing to listen to him. He loved to sing, and his talent afforded him a scholarship to Bethune Cookman College. Specialist E-4 Hobbs served two tours of duty in the Army. One tour from 1968-1970 in Vietnam where he earned the Bronze Star Medal; National Defense Service Medal; Vietnam Service Medal W/2BS; Vietnam Campaign Medal; Combat Infantryman Badge; Vietnam Cross of Gallantry W/Palm; Expert Badge with M16 Rifle Bar; and 2nd Class Gunner Badge with M-60 Machine Gun Bar. His second tour of duty was in Germany from 1976-1979. The discipline and patriotism he learned in the Army never left him, as his family and friends will attest. His post-military life included several careers, including owning his own cleaning service, and working for 16 years with the US Postal Service where he retired in 1999. Lenton was a member of the distinguished Alumni Singers of St. Petersburg, where he met the love of his life, his wife Carolyn Green Hobbs. Lenton also played trumpet in the Second Time Arounders band of Tampa Bay. Lenton and Carolyn married on November 17, 1990. He was a member of Bethel Community Baptist Church. He was also a member with the 320 MP Co Reserve unit. Shortly after retiring, Lenton experienced several major illnesses, but, he never complained. He was in the care of a long-term rehabilitation facility for two years prior to admission to Bay Pines VA Hospital; where he passed away. Lenton Hobbs was loyal and dedicated to his family. He never let those he treasured forget how much he loved them. He believed in justice and standing up for righteousness. He was a soldier for the United States of America and a soldier in the Army of the Lord. Lenton Hobbs leaves to cherish his memory his devoted wife of 29 years, Carolyn Hobbs; his daughters, Celora Douse Jackson (Orvane), and Christa Douse; his son, James Douse; his grandchildren: Jaime, Jerrod, Cebrina, Jermeil, and Olivia; his brother, Melvin Hobbs; his nieces, Pamela Hobbs and Toccara Hobbs; his nephews, Bernard Hobbs, Tyrone Hobbs and Travis Hobbs; and many other family and friends. On September 15, 2020 Lenton joined his daughter Carmen; his sister Barbara; his brother Calvin; and his parents among the heavenly host.

Lenton Hobbs Jr. was born on September 5, 1947 in Cross City, Florida to the late Lenton Hobbs Sr. and Amanda Jackson Hobbs. At a young age, after the death of his mother, Lenton Jr. moved to Ft. Myers, Florida where his aunt, Arizona Clark,... View Obituary & Service Information

The family of Lenton Hobbs Jr. created this Life Tributes page to make it easy to share your memories.

Send flowers to the Hobbs family.