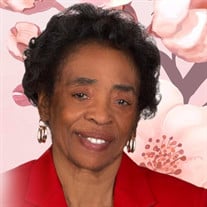 Laura Estella Smith Murray, of Jackson, MS, was called to her heavenly home on February 23, 2021. Laura was one of three children born to Whitfield Smith, Sr. and Mary Alice Fitzgerald Smith. She was the beloved wife of the late Elder Morris Taylor Murray, Sr. (2014) for 58 years. From this union came two children, Gwendolyn and Morris Jr. She was also preceded in death by her brothers, Whitfield Smith, Jr. (2010), and Daniel Willard Smith (2020). She was born and raised in Jefferson County, MS where she began her early education, then moved to Natchez, MS as a boarder in order to attend high school. She graduated from Brumfield High School in 1952. She continued her educational pursuits at Alcorn A & M College where she graduated with a Bachelor of Science degree in Education. She began her teaching career in Natchez at the Steven’s Clinic as a Kindergarten teacher. When busing became available, she moved to Anchorage High School, and finally relocated with her family to Jackson, MS in 1962. There she became an Elementary School Teacher within the Jackson Public School System at G. N. Smith Elementary School. During her tenure there, she obtained her Master of Arts Degree in Education from Jackson State University. She retired in 1995 after an accomplished 40 years of teaching service. Laura was especially known for her sweet, kindhearted, soft spoken, generous and loving disposition, and a faithful woman of God. She adored her parents, and after her father died, she cared for her mother in her home for almost ten years while teaching full time. She also revered her mother and father-in-law, and helped her sisters in law care for her on weekends. These sisters-in-law had become true sisters to her and remained extremely close to her throughout her life. She loved her family dearly, and she cherished and doted on her granddaughter, Lindsey. They were “True Buddies”. Laura was a faithful member of her home church, East Mount Olive Baptist. She later transferred her membership to join her husband and became a faithful member of the Church of God in Christ (COGIC) in Jackson. After his death, she relocated to St. Petersburg, Florida to live with her family, and she worshipped with them at Lakewood United Methodist Church. She will always be loved, and she will be forever missed. Her reach extended well beyond her grasp as she touched and blessed the lives of so many. She left indelible imprints upon the many students who were fortunate enough to enter her classroom. Laura will be forever adored by her son, Morris Taylor Murray, Jr. of Tampa, FL, her daughter Gwendolyn Murray Johnson, her son in law, Gordon Johnson and her granddaughter, Lindsey Taylor Johnson all of St. Petersburg, FL. Also left to mourn are loving in-laws, D’Ella Lewis, Rosie Lee Williams, Leola Johnson and Levi Murray, as well as her aunt Althea Fitzgerald Ford, all of Natchez, MS; Willa and Sam Carpenter of Montgomery, AL; and Charlie Bell Smith of Fayette, MS. She will be missed by a host of loving nieces and nephews, along with countless other family members, friends and associates who were blessed to know her. The family honored her in a private service on February 28, 2021 at Sanchez Rehoboth Mortuary in St. Petersburg, FL, officiated by Reverend Robert Pearcy. Laura was laid to rest on March 4, 2021, with her husband, Morris, at the Natchez National Cemetery in Natchez, MS. Memorial donations can be made to: Ali -Tutor Global Foundation c/o 4783 Palermo Court NE St. Petersburg, FL 33703 (Ali-Tutor’s mission is to provide global access to education for every child with its artificial intelligence platform.)

Laura Estella Smith Murray, of Jackson, MS, was called to her heavenly home on February 23, 2021. Laura was one of three children born to Whitfield Smith, Sr. and Mary Alice Fitzgerald Smith. She was the beloved wife of the late Elder Morris... View Obituary & Service Information

The family of Mother Laura Smith Murray created this Life Tributes page to make it easy to share your memories.

Laura Estella Smith Murray, of Jackson, MS, was called to her...

Send flowers to the Murray family.