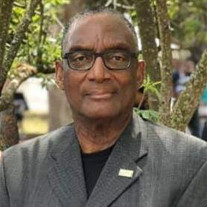 Kenneth Tyrone Drayton was born November 23, 1948 in St. Petersburg, Florida. He is Willie and Melvina Drayton’s eldest of six children. Kenneth grew up and received his formal education in St. Petersburg, Florida, and graduated from Gibbs High School in 1966. After graduation, Kenneth enlisted in the United States Air Force. There he served for four years as a Medical Dental Specialist at the rank of Sergeant. After retiring from the military, Kenneth attended American International College in Springfield, Massachusetts. Kenneth spent much of his time after the military and college doing what he loved most – coaching and officiating basketball. Kenneth moved back to St. Petersburg and began a 30+ year career in the Pinellas County School District retiring as an Attendance Specialist. Known all over town as Coach Drayton, Kenneth coached football and girls basketball at Lakewood High School. Eventually, he went on to coach AAU basketball and officiate in several conferences including the Big East (American Atlantic Conference), SEC, ACC, Sunbelt Conference, Atlantic Sun, Conference USA, Sunshine State Conference, WNBA, and the Pinellas area referees until the age of 70 in 2018. While he truly loved the game of basketball, he also had a passion for music (with an extensive record collection) and photography. Kenneth was truly blessed. His father, Willie Drayton, Jr., his mother Melvina Drayton, and his brother Douglas Drayton preceded him in death. In 1991, Kenneth married his wife Kathleen. Along with his wife, Kenneth’s children will cherish memories of time spent with him; Kenneth, Jr., Monica, KeLinda, and Kasey. He also leaves his two brothers, Arthur and Nathaniel and two sisters, Melvina and LaTanya. Kenneth has seven grandchildren and a host of nieces, nephews, cousins, and other loving relatives and friends. On the evening of February 14, 2020, Kenneth went home to be with the Lord.

The family of Kenneth T. Drayton created this Life Tributes page to make it easy to share your memories.

Send flowers to the Drayton family.