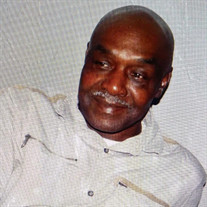 The Race is Over; The Battle is Won; 76 laps and Jake Gaines Jr. is declared the winner by "the Grace of the Lord". Hallelujah! Mr. Jake Gaines, Jr. was born in Marengo County, Linden, AL on the blessed day of August 13th, 1944, to the late Jake Gaines, Sr. and Gertrude Cook Gaines. Jake met the love of his life, Ellie. They were married, and he dedicated his life to her and the seven children they were blessed with: Patrick, Jake, Cynthia, Christopher, Michael, Angela and Lisa, the baby of the bunch. Jake had a very successful career in the construction and paving, retiring as a project superintendent. He enjoyed car racing; whether it was in the streets; up and down 5th Avenue South with his brother George, “Billy,” watching on television, or at the actual events. He also loved listening to music, watching sports and going to the Casino. However, next to car racing; particularly NASCAR, was working in his garden growing greens, tomatoes and carrots; even if he did not have a green thumb. lol Yet nothing gave him greater pleasure than spending time with his family; especially those great-grands. He was devoted to his family and all the kids affectionately referred to him as “DaDa”. And he faithfully set-aside time to enjoy them; whether in sickness or good health. On April 23, 2021; lap 76, he crossed the finish line and an angel of the Lord welcomed him into his heavenly home. In addition to his parents, Jake Gaines, Jr. is preceded in death by his brother George “Billy” Gaines and sister, Debbie Richardson. He leaves to cherish his memories: - Wife: Ellie Gaines; - Children: Patrick Gaines, Jake Gaines (Sabine), Cynthia Gaines, Christopher Gaines (Jannie), Michael Gaines (Tina Lee), Angela Wright, Lisa Gaines; - Siblings: Leroy, Hattie, Minnie, Arthelia, Earnestine, Mary, Parthaine and Joanne; - Grandchildren: Erika Jessika, Christopher, Alex, Michelle, Markia, Sherrish, Michela, Olizabeth, Kahlia, MeKayla, Emory, Crystal and Keyen; and - Special Bonds: Keyen, Madelyn and Durant. He also leaves a host of nieces, nephews, other loving relatives and friends.

The Race is Over; The Battle is Won; 76 laps and Jake Gaines Jr. is declared the winner by "the Grace of the Lord". Hallelujah! Mr. Jake Gaines, Jr. was born in Marengo County, Linden, AL on the blessed day of August 13th, 1944, to the late... View Obituary & Service Information

The family of Jake Gaines Jr. created this Life Tributes page to make it easy to share your memories.

Send flowers to the Gaines family.