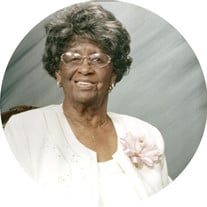 Our beloved matriarch, Gladys Adams Zilton, was born on March 1, 1914, to the late Blanch Ingram Adams and John Quincy Adams in Schriever, Louisiana. Gladys was the oldest of eight children. At the age of 18, her mother passed on to Glory and her father remarried Pearly Moore Adams. As a result of that union, Gladys was blessed with an additional nine siblings. Gladys attended school in Terrebonne Parish and progressed through the highest grade possible, which was the 8th grade. At her father's urging, Gladys voluntarily repeated the 8th grade many times because her father did not want her to have to work in the fields, as that was the only thing to do after school in those days. Gladys has always been a devout Christian. As a child and young woman, she attended Magnolia and St. Mark Baptist Churches with the family. On September 27, 1934, at the age of 20, she married the love of her life, Cyril C. Zilton. They renewed their vows in 2004, celebrating 70 years of marriage before Cyril transitioned to Glory. During those years, Gladys became a member of Mt. Vernon United Methodist Church and remained a devoted, active, and faithful member, supporting the ministries of Mt. Vernon even after moving to St. Petersburg, Florida. After leaving Louisiana, she always longed to be home and to attend her own church. To the union of Cyril & Gladys, four children were born: the late Cyril C. Zilton, Jr., the late Barbara Zilton Williams, Jerrold Cowell Zilton, Sr., and Jacquelyn Zilton Roberson. They also adopted Gladys' nephew, the late Andre Walker. Despite coping with quite a bit of loss during her years, Gladys lived a rich, whole, and happy life and experienced many moments that most of us only learned about through reading history books. She lived through Jim Crow law; the Reconstruction; World Wars I and II; the Great Depression; Segregation; the Civil Rights Movement; Neil Armstrong's moonwalk; the assassinations of John Kennedy, Robert Kennedy, Martin Luther King and Malcolm X; as well as the election of the first Black President. She and Cyril were among the first Blacks to register to vote in Terrebonne Parish. God gave her more time on His earth than most people are blessed to enjoy. She was blessed! Gladys was always a mother first. So, her preeminent and most loved job was that of homemaker and she was a great cook, known especially for her sweet potato pies. Her vocations included cosmetology and seamstress. She and her sisters, Thelma and Theresa, could sew anything from a mere picture. Her favorite hobby was traveling. Her children took her on many trips. She was fortunate to visit London, England; Paris, France; Mexico; Canada; the Virgin Islands; and almost every state in the United States. Gladys leaves behind a legion of people who loved and adored her, including Jerrold (Diana) Zilton of Louisiana; Jacquelyn (Eddie) Roberson of Florida; a host of grandchildren, great grandchildren, and great, great, grandchildren; two brothers, Claude (Betty) Adams and Henry Adams; two Goddaughters, Dorothy Johnson Hampton and Karen Hamilton; and many loving nieces, nephews, great nieces & nephews, cousins, precious neighbors; and a loving church family who never forgot about her. On April 8, 2019, our treasured matriarch departed this earth. May she rest in peace alongside her husband, Cyril, and children, Cyril Jr., Barbara and Andre and forever bask in the Glory of the Almighty. Contact funeral home in Louisiana: Williams and Southall Funeral Home; 1204 Cleveland St., Thibodaux, LA 70301; 985-447-2513; Funeral Director - Maurice Southall.

Our beloved matriarch, Gladys Adams Zilton, was born on March 1, 1914, to the late Blanch Ingram Adams and John Quincy Adams in Schriever, Louisiana. Gladys was the oldest of eight children. At the age of 18, her mother passed on to Glory... View Obituary & Service Information

The family of Gladys A. Zilton created this Life Tributes page to make it easy to share your memories.

Our beloved matriarch, Gladys Adams Zilton, was born on March...

Send flowers to the Zilton family.