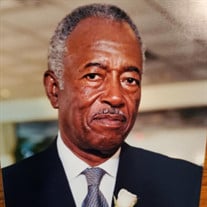 Eulysses James Robinson, Jr., affectionately called “E.J.” by friends and family was the second of two sons born on March 21, 1931, in Ft. Valley, Ga to Eulysses James Robinson, Sr. and Irene Crawford.  During the late summer of 1939, at the age of 8, his family moved to Basking Crossing in Largo, Florida where they moved into a Boxcar home on the side of the railroad tracks. At a young age, “E. J.” accepted Christ and attended Shiloh Missionary Baptist Church in Largo. When the family moved to Clearwater, he joined Mount Zion Methodist Episcopal church, now Mount Zion United Methodist Church. There he long served as Chairperson of the Administrative Council, Trustee Committee, SPPRC Committee, and Treasurer.   In 1950 “E. J.” was drafted into the United States Army and was stationed in Munich, Germany. Upon being “Honorably Discharged” in 1952, he returned home to Clearwater where he continued his education through the G.I. Bill at Pinellas High Vocational School, there he took courses in carpentry and cabinet making. His discipline and skills attracted the attention of Howard F. Al Lender and Murray C. Goddard who instructed him in architecture design and construction. Mr. Goddard taught him how to estimate the cost of new construction, remodeling, repairs, material stress and how to use the slide rule. After completion of his studies, he started his business carrying tools around in a cardboard box. As he gained hands on knowledge of the trade, in 1962 E.J. became Clearwater’s first African American licensed General Contractor and was instrumental in the construction of several churches including St. James Methodist Church, as well as Ridgecrest Nursery, Ridgecrest Thrift shop, Community Pride Child Care Center’s addition and Lincoln Center Nursey. Having discovered his professional and vocational passion, in 1962 ‘E.J.” became the first black Inspector in the building department of the City of Clearwater. Within two years he became the director of the building department and in 1968 had the honor of becoming the first Affirmative Action Officer for the City of Clearwater.  By the time of his retirement, he held the position of Assistant to the Mayor. Post-retirement, he continued implementing his skills in service to the city and community by developing the first draft of a housing program for low-income housing. In addition to being a devoted family man who showered his family with love, wisdom, and knowledge, E.J. was a humanitarian who readily shared his expertise in an effort to help members of the community achieve their goals. He was also an avid golfer, a great cook, and a lover of sports and old westerns.   On Saturday, August 21, 2021, E.J. Robinson departed a life well lived, to be with our Lord and Savior Jesus Christ. . . and a well-earned rest in ever his loving arms.   He leaves to cherish in memory…  A loving Wife: Lynne E. Robinson;  Two Children: Cheryl A. Robinson, Wayne A. Robinson (Andrea Lynne Earl);  Grand-daughter: D. Melanie Robinson-Andre’;  Great-grandson: R. RaShawn Robinson;   Sisters-in-law: Twana Jones and Laurel Braswell;  Niece: Cassandra D. Lockett (Raised as a daughter), Nanzetta Sadberry (Frank), Alexis Braswell and Skylar Braswell; and Nephews: Dr. Ronald S. Smith (Dr. Alicia Jones-Smith), Randall F. Smith (Kosepha Smith), Samuel Robinson Jr., Grover Byrdsell (Sharon), Rev. John Byrdsell (Jean) and Glen French II.

The family of Eulysses James "EJ" Robinson Jr. created this Life Tributes page to make it easy to share your memories.

Send flowers to the Robinson family.