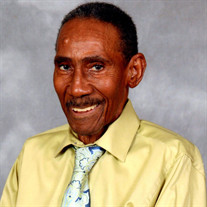 A JOURNEY TO A NEW BEGINNING A TIME TO LIVE: Bobie Aires was born December 29, 1927 in Jennings, FL, to the late Ernest and Edna Aires. He was the 5th eldest of 8 children. In 1933 the family moved to St. Petersburg, FL where he received early Christian education at Triumph Holiness Church. As a pre-schooler he, like older siblings before him, attended a Bible-oriented school – Miss Lizzies. Here he was taught, and could recite from memory, the Books of the Old Testament before becoming a first grader in the public-school system. Bobie and Otelia Plummer were married in 1947. To this union three children were born. Two preceded him in death. To the union of Bobie and Jewel Robinson Aires, one child was born and preceded him in death. Later he was united in marriage with Ruby Aires, his current wife. A TIME TO LEAN: Bobie joined Southside Tabernacle Baptist Church under the pastorate of Dr. Lewis C. Lampley in 1969. He worked in several capacities at Southside, however, he was especially involved with the Men’s Ministry. Bobie’s singing voice was not his “strong suit.,” but he sang anyway. As one who loved to engage in fun and friendly chatter, he was a most welcome presence in the Singing Men’s Choir and Men’s Ministry. All will note his absence. Bobie remained active at Southside under co-pastors, Rev. Henry Payne and Rev. Richard Jackson, until his health failed. A TIME TO LABOR: As a young man, Bob’s independent nature led him to seek and gain experience that would align with his entrepreneurial spirit. He mastered the skills necessary to start his own business manufacturing cabinets and doors in an industrial setting, and to become the owner of his own meat store in Mid-town. Having honed his skills as a carpenter, he dedicated himself to the task of making substantial building and structural improvements at Southside with precision and attention to detail. Although, it was his partnership with his co-workers and Mrs. Shirley A. Hensley, which made such work seem effortless. He loved whom he worked for and enjoyed whom he worked with. A TIME TO LEAVE: HOMEGOING: Bobie embraced these words literally. “I don’t know how I’m going; I don’t know for certain when I’m going, what I do know is where I’m going – and I’m on my way.” “Your goodness and unfailing kindness shall be with me all my life, and afterwards I will live with you forever in your home.” Psalm 23:6 JOURNEY COMPLETED APRIL 22, 2019 Bobie was preceded in death by his parents; sons, Theodore (Teddy) and Gary; daughter, Pamela Aires Williams; siblings Julius Aires, Ardine Ayers, John (JT) Ayers, Lillian Miller, Katheryn (Senie) Monroe. He leaves to rejoice that he lived: Daughter, Phylestine Aires; wife, Ruby Aires; siblings: Inez Lavind and Gwen (Herb) Dixon; aunt, Lovie Peterson; sister-in-law, Helen Ayers; grandchildren, Yvette Wyatt (Cleven), Vincent D, Okia, Shonda, Michelle, and Shawn Aires; Candice and Joy Williams; Shanice Brickhouse, and Tisha Sanders; 30 great-grandchildren, 8 great-great-grandchildren; many nieces, nephews, cousins, 1 god-daughter, Conchita Davis-Walker; other loving relatives and friends. He also leaves friends whom he regarded as very special, which include former Pastor Lewis C. Lampley; co-pastors, Rev. Henry Payne and Rev. Richard Jackson and Dea. Willie Simon of Southside. HE’S DONE ENOUGH It is enough that Jesus died and that He died for me.

A JOURNEY TO A NEW BEGINNING A TIME TO LIVE: Bobie Aires was born December 29, 1927 in Jennings, FL, to the late Ernest and Edna Aires. He was the 5th eldest of 8 children. In 1933 the family moved to St. Petersburg, FL where he received early... View Obituary & Service Information

The family of Bobie Aires created this Life Tributes page to make it easy to share your memories.

A JOURNEY TO A NEW BEGINNING

A TIME TO LIVE: Bobie Aires was...

Send flowers to the Aires family.