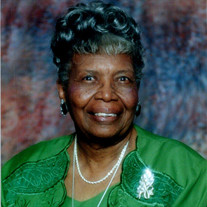 Born August 12, 1922, in Trilby, Fl, Bertha James was the daughter of the late George and Mattie Lee Garvin. Her mother passed away at age twenty-two and, two years later her father took ill and passed away shortly thereafter. She was only 7 years old at the time so she went to live with her grandmother in Brooksville, Fl. Bertha attended Morton School in Brooksville for grades 1 though 9, however, due to the limited educational facilities available Bertha asked her grandmother if she could stay with her aunt, Julia Roland in St. Petersburg, Fl. After relocating she attended Gibbs High School where her favorite classes were music and singing. While at Gibbs, Bertha met the love of her life, Chester L. James, Jr. and they were married December 10, 1944. The Lord blessed their union with one son, Vincent James. At the loving nudging and encouragement of her husband, Bertha decided to further her education. She enrolled at Florida A & M University in Tallahassee, Fl and received her BS Degree several years later. However, her appetite for learning did not end there, she later attended Case Western Reserve University in Cleveland, OH and received her Master’s Degree in Education. Teaching was her passion and the joy of her life. Bertha dedicated more than 33 years of her life to helping children in Pinellas County achieve their place in society; she was both an educator and mentor. Her first 3 years of teaching were at Curtis Elementary, which was renamed in 1957 to Jordan Elementary School. She taught Second Grade there for 14 years; until 1972. She also worked in the Chapter 1 program at various Catholic schools, including St. Paul, St. Joseph and Immaculate Conception where she was the Supervisor of the Reading Program. Bertha retired in 1986 ... and another chapter of her life began. Serving with her husband, The Rev. Chester L. James, Jr., who was now the pastor of Tenth Street Church of God, became her new focus in life. Bertha held many positions in the church: First Lady (first and foremost), she sang in the choir, worked on the Pastor’s Aide Committee, and served with the Florida State Board of Christian Education. She was also the Mother of the Church. Bertha served as the secretary of the Florida State Association, Suncoast of Florida Association, Suncoast Minister’s Wives and Widows, Housing Board at West Middlesex, Pennsylvania, Parliamentarian for WCG and Historian for WCG, (Women of the Church of God.) Throughout the years Bertha received many accolades and recognitions for her service in her church and the community. In 2013 she was honored by the Naomi Titus 2 Covenant Alliance Ministries for her dedication and service. She was a charter member of the Alpha Kappa Alpha Sorority Incorporated - Zeta Upsilon Omega Chapter. She was considered a Golden member having a membership that spanned 68 years. In December of 2019 just one week before her passing the Alpha Kappa Alpha (AKA) Sorority honored her for being their oldest living member, at the age of 97. Bertha James had an infectious smile, beautiful spirit, and a gentleness about her that made everyone around her feel at home. She was an awesome woman of God and a true soldier. On December 31, 2019, the Lord called His faithful servant to eternal rest. “Well done, thou good and faithful servant: thou hast been faithful over a few things, I will make thee ruler over many things: enter thou into the joy of thy Lord.” Matthew 25:21. Bertha was predeceased by her husband, The Rev. Chester L. James. Jr.; son, Vincent G. James; parents, George and Mattie Lee Garvin; and aunt Julia Roland. She leaves to cherish her memories: Her grandchildren: Tyeisha, Deontrey, Larry and Alexis James; Stacy Oliver (Alex) and Warren Morris Daughter-in-law: Pamela Bell Great-grandchildren: Taylor, King, and Queen James; Ayden Oliver Niece: Lynette Hardy Devoted godchildren and caretakers: Loretta Morris and The Rev. Alfonso Woods (Shirley) Additional godchildren: The Rev. Dr. James and Lady Diana Eubanks of Ft. Lauderdale, Fl, The Reverends Silas and Vernetta Oliver, Richmond, VA, Dr. Timothy Askew, Atlanta, GA, Myrtis Klugh, California, Shelia Lamb, Derrick Connelly, Jacob and Julann Baker, St. Petersburg, Fl, Dr. Timothy Clark of Ohio She also leaves to cherish her memories, her personal aides who provided for her 24/7, devoted friend Ruth McCall, the staff and residents at Grand Villa St. Petersburg and a host of other loving relatives, many associates and friends, whose lives she touched over the years.

Born August 12, 1922, in Trilby, Fl, Bertha James was the daughter of the late George and Mattie Lee Garvin. Her mother passed away at age twenty-two and, two years later her father took ill and passed away shortly thereafter. She was only 7... View Obituary & Service Information

The family of Bertha L. James created this Life Tributes page to make it easy to share your memories.

Send flowers to the James family.