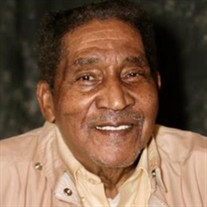 Amos Hosey, 91, of St. Petersburg passed away in his home on Nov. 5, 2020. Born Dec. 17, 1928, to Joe and Ellen Hosey in Bay Springs, MS, he was the youngest of 13 children. Amos grew up on his family’s farm in Mississippi and attended a one-room schoolhouse in Blue Ridge. Helping his parents maintain the land was a requirement growing up, so hard work was simply a part of his DNA. For fun, he frolicked in the woods with friends and family and participated in a competitive gospel quartet. Those were tense -- but cherished -- years in the Deep South. On April 24, 1948, he eloped with his childhood sweetheart, Arellia Jones, and carved out a strong union of 61 years together. The couple moved from rural Mississippi as part of the Black Migration to the North, looking for a better way of life during the Industrial Revolution. They finally settled in the Shenango Valley of Western Pennsylvania, after short stints in Massachusetts and Ohio. There, they raised six kids in the steel-mill towns of Sharon and West Middlesex, PA. He worked for the Sharon Steel Corp. for nearly 40 years as a blast furnace laborer, in the hottest part of the mill. But he built a legacy with his God-given talent as a master carpenter. A self-taught woodworker, he would carve stunning replicas of trucks, planes and farm equipment as a youth and receive blue ribbons at local craft fairs – if the judges did not rescind the award once they found out he “did not qualify” because of his race. This did not deter him. He pressed on with his passion. In 1951, Amos honed his natural skills after purchasing the only house he could afford in Sharon - a dilapidated, two-story home, with rotten wood and a moldy basement that made a fine host for things other than his young family. He took to heart the wisdom of “measure twice and cut once” and mastered home repair in carpentry, electrical and plumbing. He transformed the home, turning it into a neighborhood gem. His fame grew and so did demand to work on other homes in the area. With the help of his wife, he became a certified minority contractor through the joint efforts of the Shenango Valley Urban League and NAACP Revitalization Home Repair Program in the 1970's and was the first Black man awarded company credit with the Flower’s Lumber Co. He and his wife launched a successful side business in small home construction, to supplement his full-time income, aptly supporting his family. Amos’ passion was for custom furniture pieces. People of all persuasion sought his work. When asked how he found inspiration for his creativity, Amos would always say, “The Lord gave it to me!” In 1974, he designed and built, by hand, his dream home – a large, red-brick ranch in West Middlesex on 5 acres that became the central point for many family gatherings. In fact, he and his wife hosted their 50th wedding anniversary there in 1998. It was the first time they had a formal wedding ceremony since eloping in 1947. Amos loved his community and church and used his skills to improve church buildings and altar settings. He was a lifelong deacon at Valley Baptist Church and later, Greater Mt. Zion COGIC in Farrell, PA. Years later, in retirement and after moving to St. Petersburg with his wife in 2004, he joined the deacon board of Rock of Jesus Missionary Baptist Church and later the congregation of Bethel Community Baptist Church. For some of his last sanctuary work, he built an altar for St. James AME Church in Clearwater under the direction of the Rev. Kenny Irby, and in 2008, St. James ceremonially honored Amos for the newly installed structure. Along with his wife, Amos was an avid gardener – every summer harvesting enough produce from a large plot of land to put some in cold storage, as well as give away freely to neighbors and those in the community. He also enjoyed singing and playing his Hammond Organ, in which he also was self-taught. It was common to see him use a Southern tradition and randomly bounce up from a church pew and belt out a solo gospel tune in the middle of a service. His strong tenor voice was always a crowd-pleaser. Amos passed down to his kids the importance of endurance and was adamant about making sure they understood what that was all about. Impacted by the lessons of growing up in the Jim Crow South, Amos instilled confidence, a hard work-ethic and personal responsibility to his family. He encouraged them all to use their artistic gifts to create with their hands as a means to always have a way to carve a unique path in life. He passed away peacefully in his sleep just days after voting in the 2020 presidential election. Survivors include his sister LouEllen and his six children, Diane M. Williams of Houston, Kathy Hosey of St. Petersburg, Peggy S. Hosey of Atlanta (Don), Amos Jr. of Columbia, S.C., Boyzell Hosey (Andrida) of St. Petersburg and Roy Hosey of St. Petersburg (who followed him in death); Amos was preceded in death by his wife, Arellia; parents, Ellen and Joe Hosey; siblings Ethel, Harvey, Estes, Colee, Nettie, Eola, Roy, Rubie, Rosalie, Izetta and Howard; and grandson Jason Williams. A viewing will be held Friday, November 20, from 5-7 p.m. at Sanchez Rehoboth Mortuary, 6501 25th Way South, St. Petersburg. A graveside service will be held Saturday, November 21, at 11 a.m. at Woodlawn Memory Gardens - Garden of Tranquility, 101 58th St. South in St. Petersburg. woodlawnmemorygardens.com/locations/ Funeral arrangements are under the direction of Sanchez Rehoboth Mortuary where online condolences may be shared. Charitable contributions can be given to Suncoast Hospice Foundation at suncoasthospicefoundation.org/donations/

The family of Amos Hosey created this Life Tributes page to make it easy to share your memories.

Send flowers to the Hosey family.